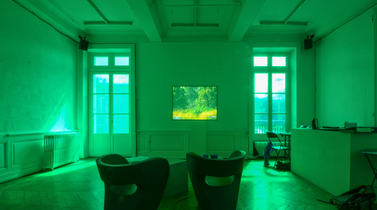 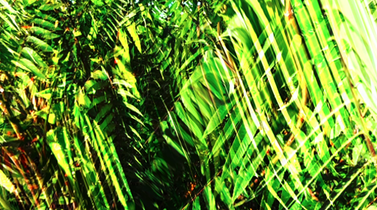 GREENSOUNDS is a musical installation presented in museums and art galleries. It is an interactive declination of ANIMOTS that operates in a sustainable manner since December 2000 at Gerland Park in Lyon . This is a sound system that appears to come from green vegetal space of the Park. A sound and spatial strategy are calculated as a random schedule; the result is released under computer control from 16 loudspeakers. The compositions are performed at different times from three kinds of sounds. A first type is characterized by natural sounds that can be heard in parks, gardens, countryside as sounds of birds, small animals, water, wind … In this case of mimesis it becomes difficult to distinguish them from those naturally existing in the Park. Oppositely, a second category is based on cultural nature sounds as instrumental sounds, voice or synthetic played as such or after sound processing. Such sequences commonly cause to the walker the surprise of an unusual noise situation in a park, in opposition to the idea of a natural sound signature. A third type is developed from ambiguous sounds between nature and culture. This one interrogates and provoke a shift in the perception, sometimes on one side, then the other.

Unlike ANIMOTS that exists and lives his life in a micro-world, fully independent living with the Park, GREENSOUNDS is an interactive installation in part influenced by the listening visitor. A first gestural interface between the visitor and the device consisted of sensors manipulated by it which each emit geometric situations of information, speed, acceleration …

In this new version, the smartphone is the gestural interface. The information from the smartphone act both on the compositional and spatial strategies described above and create new events whose type, spatiality, velocity are interpreted from the actions of the manipulator-visitor

A visual echo of Gerland Park is proposed in parallel, from a video of a green and colorful atmosphere. The installation takes place in an indoor space from 6 points sound diffusion: